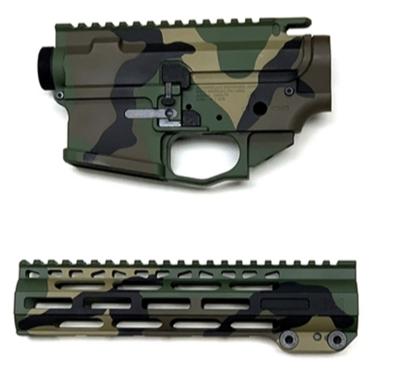 The ADM4 billet 7075-T6 Lower/ Upper Receiver/ Handguard Set features a custom M81 Woodland cerakote pattern professionally produced by Republic Rifle. It is outfitted with our proprietary Ambidextrous magazine release, Ambidextrous bolt catch and release, and our dimpled Take down and Pivot pins. The magazine well features reinforcing ribs that make the magazine well 40% stronger than mil-spec forged at only half ounce of weight change. The trigger guard is ready for winter gloves without manipulation. Radii and chamfers throughout make this billet lower a marvel that stretches the capabilities of modern production CNC manufacturing. A 20 degree competition style mag well is concealed in the design, allowing lightning fast magazine changes. An integral upper/lower tension adjustment screw allows the end user to compensate for tolerance between your upper receivers and your favorite lower. The ADM4 Lower Receiver will ship with all ambidextrous controls installed and include our dimpled take down/pivot pins. The UIC Upper Receiver will ship with the Forward Assist and Ejection Port Door installed. The Handguard includes Barrel Nut and Mounting Screws. **Due to the design of the Ambi Bolt Catch/Release, the lower is NOT Compatible with certain triggers that utilize anti-rotation pins that use external screws or plates ( Such as CMC Triggers or KNS Anti-Rotation Pins )Standard GI type triggers and Geissele triggers WILL work with with this lower.** Weight: 2 lb 7 oz.