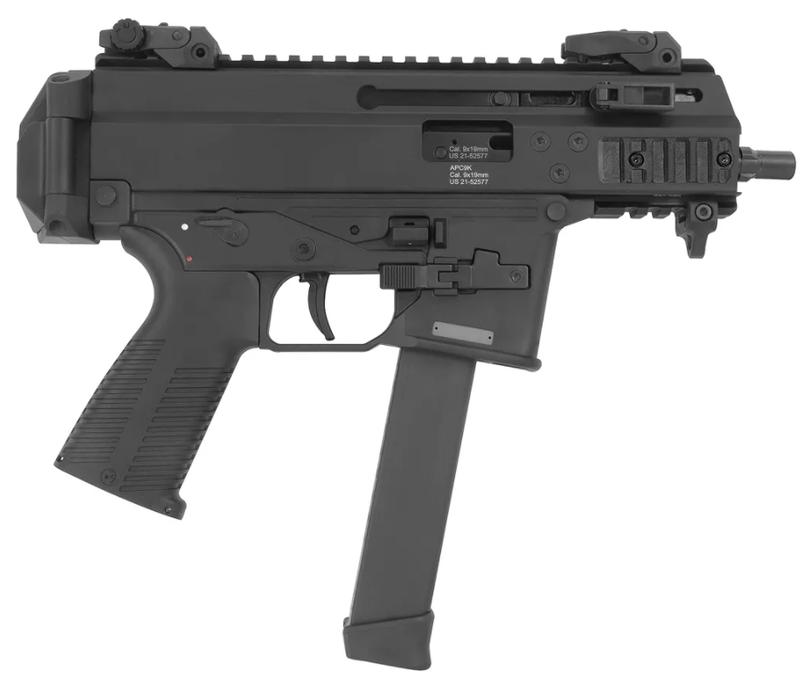 As one of the flagships of B&T, the APC PRO line represents a breakthrough in customization and modularity on a pistol-caliber platform. Every component is of the highest quality, and is meticulously machined and fitted with the Swiss-made precision that B&T is known for. The APC PRO itself is equipped with several major upgrades such as enhanced lower receiver ergonomics and a side positioned bolt hold open/release. The APC PRO also sports a non-reciprocating, auto-folding charging handle to reduce the risk of snagging on loose clothing/equipment. At the heart of the APC system is the hydraulic shock-absorbing buffer system which greatly mitigates recoil and enhances overall accuracy. In terms of customization, the APC PRO features a flattop picatinny rail for optics as well as a an under-barrel rail for lights/lasers. Each APC PRO unit also has a variety of B&T made accessories including brass-catchers, extended magazines, and fore-grips designed specifically for that model. In addition, many aspects of the APC PRO are reminiscent of the AR-15, such as the ambidextrous selector switch, the ergonomics, trigger assembly and accepts AR-15 style grips. These similarities make for a better shooting experience for someone already acquainted with the AR-15. This APC9K's lower receiver has also been outfitted to accept the widely available Glock magazines, including the 33 round extended magazine.

DISCLAIMER: This product is not manufactured, authorized, endorsed,
or warranted by GLOCK. GLOCK does not warrant or represent that this
product is compatible with GLOCK pistols.